I am in mood of knowing more about Vishnu Sahasranamam and learning to recite it in a perfect way!

I have copied the below content for my reference,so that i can have a look at it  any time i want to!

Let me know if some one has much more details of it or the articles u loved!

Vishnu Sahasranama (VSN) is the list of one thousand names of Lord Vishnu, the Protector of universe in the Hindu Trinity, the other two are Brahma (creator of the universe) and Shiva (Destroyer and Re-creator). The main source of VSN is the Anushasana Parva of the Mahabharata. In the epic Mahabharata, Pitamah Bhishma, was awaiting his death lying on the bed of arrows surrounded by the Pandavas. When Krishna advised the Pandavas to get wisdom from Pitamah Bhishma, Yudhisthira (the eldest of the Pandavas) asked him, “Which is the best Japa (recitation or chanting) by repeating which, the embodied beings get what he or she desires and ultimately reaching salvation?" In reply to this Pitamah Bhishma uttered the 1000 names of Mahavishnu based on His Divine attributes. Thus began the thousand names of Vishnu. or Vishnu-Sahasranama (VSN). The recitation of this passage from the Mahabharata is considered to be the easiest method in the age of Kali (Kali yuga) for realising Moksha, the ultimate goal of life according to Hinduism. The effectiveness of this method is praised by Acharya Shankara in the "Bhaja Govindam Stotra". He valued it very highly and wrote a commentary on it. The VSN available on-line in the PDF form, which can be downloaded and printed in Sanskrit-English, Sanskrit-Hindi and other similar combinations.

What is the process of reciting or chanting VSN ?

The recitation of VSN forms a part of the daily worship in most of the Hindu temples especially in the southern part of India. The recital can be continuous like the singing of a hymn. Or, the names may be chanted one by one, with the sacred word Om before each name and the word Namah after it. As an example "Om Vishnave Namah. Salutations to the Lord Vishnu. " Many times devotees gather together for group-recitations. As I said before even with the best of intentions, one may not be able to recite VSN daily. What should one do then? Knowing human weakness, the ever compassionate Divine Mother "Parvati" asks Lord Ishwara (Shiva): "I would like to hear from you the easy means by which the thousand names of Vishnu. can be daily recited in short time by the devotees." Lord Ishwara (Shiva) replied:

Did this veryy long back! 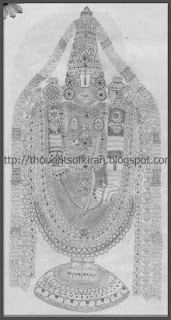